Friday, the night before Halloween…

The creepy creatures were stirring, the scary movies nonstop, the costume creation (a vampire) in the nearly complete stage. Oh how we adore Halloween. (But not the dusting of S-N-O-W received overnight.)

For this entry, we’re trying something a little different. If you’re on “le list” you’ve been getting handy dandy Friday fall color updates, some tasty recipes from 1898 and dog friendly recipes, plus assorted baubles and bits. We thought, why not extend this onto the blog for a little bit of pizzazz. (If you’re on “le list” you’ll still get the emails!). Without further babble, let the Fridays begin!

The goal of Pitbull Awareness Month is to give people the chance to learn about the true nature of pitbull type dogs in the hopes of getting rid of years of negative stereotypes that are unfair. Being a pittie mom I can say he’s a dog.  He’s a doofus, nosy in a “the grass is greener on the other side of the fence” way, snores like an old man, tolerates being photographed, loves walks and suntanning, and is extremely particular about dogs he likes vs wants to eat their face. If you’re in his circle of people he’s happy to see you and will snuggle your warmth. He barks at squirrels, cats, people jogging, people on walks with their dogs, the mailman and delivery guys, all while sitting on the back of the couch like a 65 lb kitty cat.

Some famous pitties you might know: Petey from the Little Rascals, Sergeant Stubby the most decorated dog of World War I, and Grunt in the movie Flashdance.

We like to bake, morso than cook. In fact later today there will be some mega tasty ginger cookies that will be created (there’s 6 sticks of butter on the counter to get to room temp).

Where do these recipes come from? Depends. The ginger cookie is a recipe from the internets. Other recipes, well they are of the analog style. Taken from the collection of 58 cookbooks, aged 1898 to 1970s, from Betty & Better Homes, to small companies, brand names, churches and handwritten bits, these recipes give a touch of tasty vintage to the kitchen. The most common looked for recipes? Cinnamon rolls, cakes & cookies. Savory? Main courses? Who cooks that? HAHAHA!

One of the favorites is the 1898 The Daily News Cook Book. It’s a calendar of meals, dated, and entries submitted by people across the country, with the whole year of meals costing you a budget of $500. ($3,135.90 in today’s inflation.) 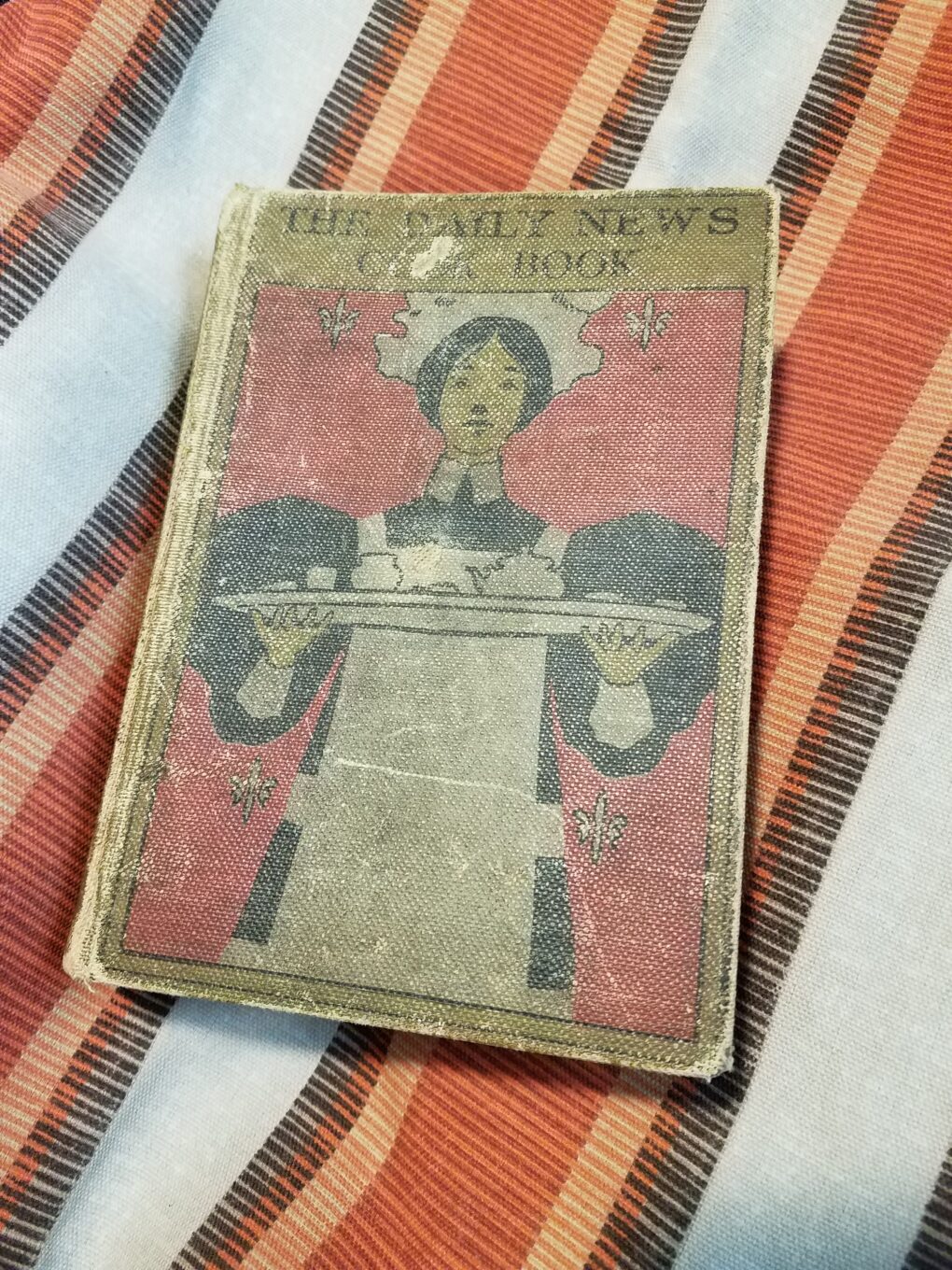 One of our favorite things to do is find the date and share the recipe. We’ve had squab, graham muffins, and many others, tasty and odd. One unique thing about the 1898 cookbook is that is assumes you know A.) how long to cook something B.) what oven temperature you need or C. ) what a fast or slow oven is. Adds to the adventure of the recipe.

Nothing overly exotic, though the quaker oats and the Harvard pudding are curiosities. Shall we see how we craft them?

* sweet milk = plain milk
**yes it’s literally Quaker Oats – high odds they are the old fashioned style (Quaker Oats was based in Chicago!)
*** saltspoon is a tiny spoon used with a salt cellar that sat on the table, it equates to roughly 1/4 teaspoon

HARVARD PUDDING
Sift together two and one-third cups of flour, one-half cup of fine granulated sugar, two teaspoonfuls of baking powder and one-quarter of a teaspoonful of salt. Work into this with the tips of the fingers one-third of a cupful of butter. Beat one egg light, add cupful of milk and turn onto the dry ingredients. Pour the mixture into a buttered mold and steam for two hours. Do not allow the water to stop boiling for an instant.

*Vintage pudding is much different than the classic sweet treat that involves milk & powder or peeling back the lid of a cup (butterscotch please!). Pudding can be baked or steamed, savory or sweet. This seems a bit like a biscuit, you may be able to add in a little vim and vigor with spices. Seems a steamed pudding is cooked on the stovetop in a covered pan with boiling water. Interesting…

Also, both recipes are dog friendly if you wanted to share! Remember to do treats in moderation!

Best of luck, let me know how your cooking adventure goes! 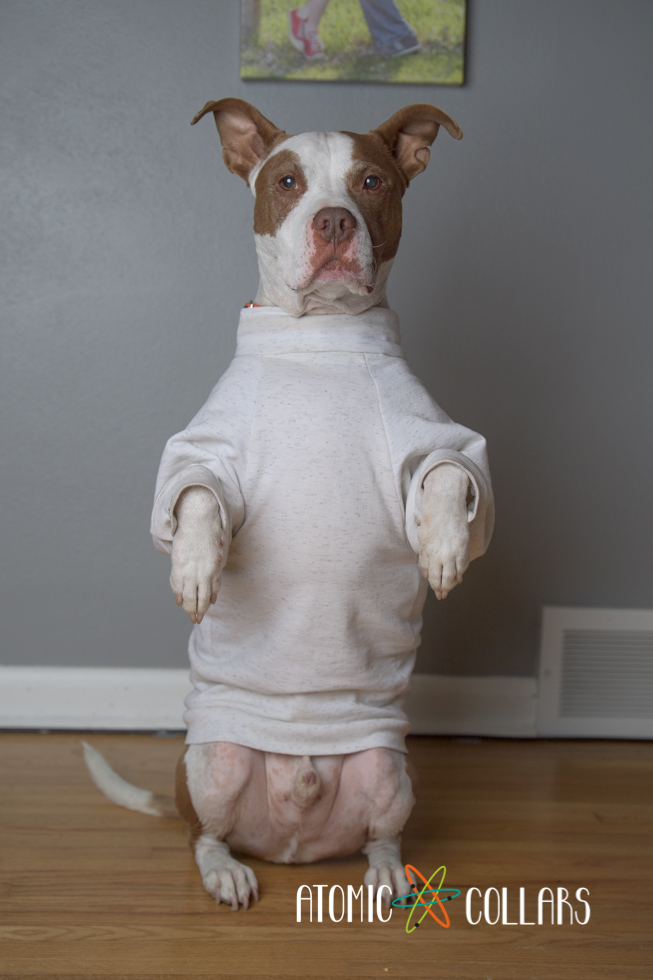 We are introducing hoodie and crewneck sweatshirts! (There also might be jackets on the horizon!). Made from upcycled and recycled found materials, these sweatshirts are one of a kind and perfect when the weather gets chilly. Warm classic cotton up to wool and cashmeres for the warmest, coziest cold weather wear. Sized medium to large for those bigger puppers who are freeze babies when the temp drops below 60 degrees.

Bender helped model a crewneck and a hoodie. He’s really got his haute couture “I’d rather be doing other things” model look down hahaha!

Wondering if we can do a photography session now that the weather has gone into the north pole mode? Yes we can!

Snow can make an awesome backdrop, and its fun to capture your pup romping and getting a snow covered nose! Generally classic sessions are up to an hour and half (all at your dog’s discretion) while with snow/cold weather sessions we may wrap up a little sooner, per the warmth of your dog & yourself. If we start getting super shivers 30 to 50 minutes in, we’ll make our way back to our warm cars.

If the temperature is slated to be under 20 degrees, rescheduling will be best. If the weather turns super gnarly, in the way of a massive blizzard, we’ll reschedule for a safer driving day. Rescheduling will take place no later than 2 hours prior to your session.

How many of you have snow loving pups?

Put on your costume, horde half the candy, and be safe if you decide to go trick or treating. Or even if you’re home handing out the candy.