The day was perfect for weather, the light pretty. The puppies were from the pairing Tanger (Ch Remington’s Pride Fear Cuts Deeper than Swords) & Gus (Ch Crown’s Nothing but a Jenuine Raye of Light) – the first litter for both parents! 9 in total – 5 boys & 4 girls. And one of those boys will be added to our family on Friday! EEEEEEEEK!

And where did the name of Baked Goods come from? Yours truly!

Sandra, the breeder of Remington’s Pride and I had been in contact early in the spring, just after Bender passed away. The plan was to photograph the upcoming litter and additionally get a chance to name the litter as Sandra was a little short on ideas. Brainstorming on my end and one of the results was Baked Goods. Who doesn’t like baked goods? Pies, cakes, cookies, brownies, yes please! Plus wouldn’t it be adorable to be at an AKC event and get announced as best of breed as Remington’s Pride Apple Pie or Lemon Meringue?

What the heck is the baked good that is blueberry buckle?

This is a tasty dessert, frequently made by my mom throughout our younger years into the current day, that features blueberries and a streusel topping that “buckles” while the dish is cooking. It’s closest cousin is coffee cake, with buckles having been made since the colonial times. (Fun facts: If you omit the streusel topping a buckle turns into “boy bait”, while keeping the streusel and removing the fruit turns a buckle into a hearty coffee cake!)

Digging through my mom’s recipes I found a pair of this yummy classic – though I’m not sure which is the go to. Theoretically the one marked “mom’s recipe” is from my Grandmother (my mom’s mom) and ought to be old-ish haha. Pair with a cup of coffee! (Or even ice cream!)

Pretty straightforward on ingredients (notation of Bev 1 tsp references an adjustment that my Aunt Bev – mom’s sister – had changed at some point in the recipe’s life.)

Flipping the card gets us into a vague mix & bake method (because the recipe has been done a bazillion times before). Beat everything together, fold in blueberries, greased pan, spread mixture into pan, let set. (Not sure what the “only” notation means…) Make the topping, bake and enjoy! Let me know if you try this version!

Ok ok, I know you want to see the puppy pictures! And man were these guys MEGA adorable and full of personality at 7.5 weeks!

We had a cute basket, red gingham tablecloth, faux cupcakes & donuts, and some wee little kids baking utensils quaintly set up for themed pictures of each pup, plus we were going to take advantage of Sandra’s yard for non themed pictures. Each puppy’s new owner will be getting copies of these pictures – their puppy’s first portraits!

The first puppy and the most easily recognized was Mr. Green. He rocks a slim streak of white on his nose making him easy to find amongst the broader white blazes of his siblings. He LOVED the cupcakes and would hardly leave them alone haha!

Luckily we got a couple of split moments where he wasn’t happily engaged with the cupcakes!

The second puppy was the charismatic Mr. Black. He was a charmer, had no concern for the cupcakes and props, but instead got hilarious puppy zoomies! Not one to spend a lot of time with portraits, he told us he was done by trotting back to the pen of his siblings haha!

Puppy number 3 was Mr. Red. He rather liked the cupcakes, but was happy to chase Sandra and meander around the yard as well.

The boys club was interrupted by Miss Purple. She loved the cupcakes, but really loved chasing Sandra and pulling on the hem of her capris! In fact she totally forgot the cupcakes were there as she ran about!

The second girl and puppy #5 was Miss Pink! She was cute, happy to chase and mildly interested in the cupcakes. Look how happy she is strutting her stuff! Plus she has beautiful markings!

A totally charmer and photogenic pro (he made photographing a puppy EASY!) was Mr. Blue. This handsome hunk wanted little to do with the cupcakes until he noticed them after trotting about the yard. Man he cracked me up with his reaction of “what the hell is that?!?” – it reminded me of puppies trying veggies for the first time like this Berner puppy video! What a hoot!

The last of the boys, Mr. Brown, brought out the charm. He sniffed the cupcakes, trotted about the yard but preferred to chew on leaves and sticks (he prefers organic toys hahaha!).

Final, and littlest, but not lacking in personality was Miss Yellow. The peanut was very in love with the cupcakes, happily picking them up to chew on them. She also gave Sandra sass when she was repositioned into the basket, so we sent her on a jog & chase in the yard then reset her into the basket for a lovely portrait.

All puppies photographed, light waning, we shifted locations and brought out Tanger for an attempted group shot. Tanger was excited, ran laps, played with a couple of her pups and when we got her settled, the whole pack of puppies thought the snack bar was formally open.

I made the call to re-wrangle all of the puppies and to photograph them individually then work some magic so it looked like they were all sitting alongside their mom.

Check out this superstars! Plus having the pups lined up with Tanger you can really see the variations of blazes on their faces as well as the white on their bellies. 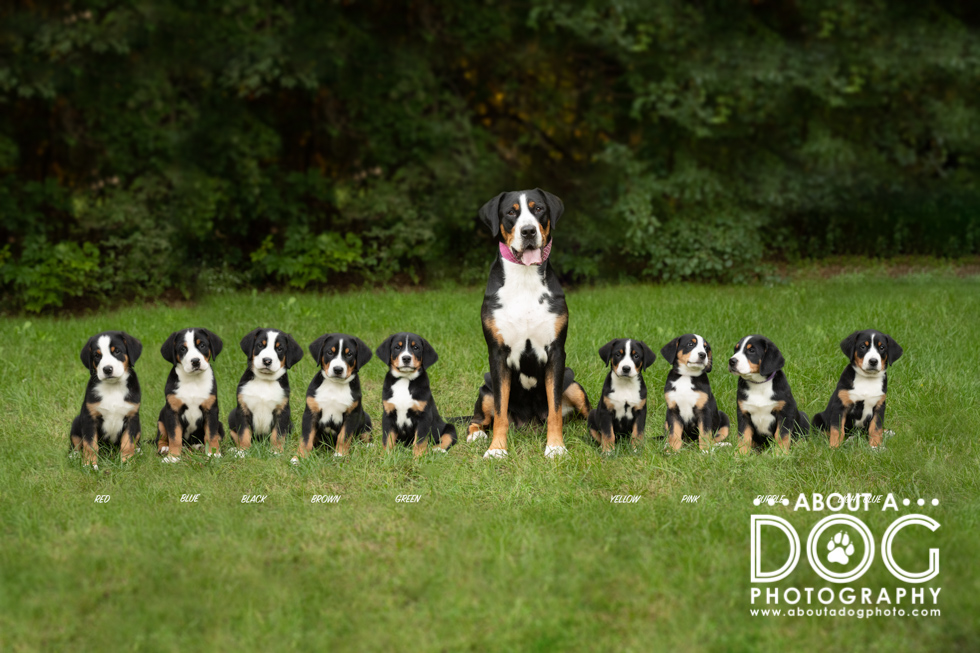 Have you guessed which puppy will be coming home with me on Friday?
(Hint: It’s one of the boys and it’s not Mr. Black!)